What makes you say that? 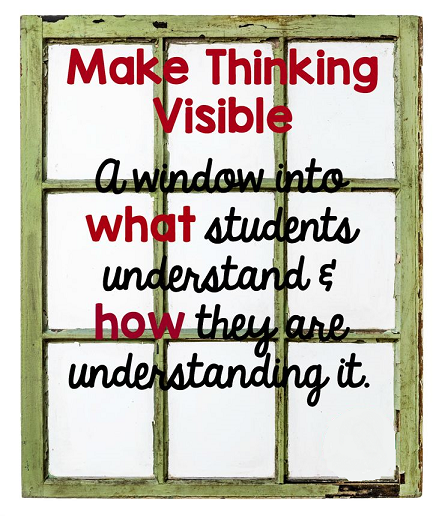 Effective teaching, by a teacher or a parent, involves questioning.  We question our students and children not to only see if they can provide an accurate answer, but also to better understand the reasoning behind that answer.  For example, asking a second or follow-up question such as “Why?”  encourages justification.

The question which serves as the title for this post is a powerful thinking routine. Its use will inform the teacher or parent posing it, but it has additional benefits.

The “What Makes You Say That?” routine helps students identify the basis for their thinking by asking them to elaborate on the thinking that lies behind their responses. (1)

As teachers, we cannot assume that students’ responses to our questions always represent the reasoning we expect.  Even a correct answer may be based on a misconception or weak reasoning.  Asking “What makes you say that?” following a student’s first response to a question encourages students to support their reasoning with evidence.  That evidence may come from a text selection, data from an investigation, a work of art (visual or performance), or from a student’s prior experience.  The opportunity to hear the basis for a student’s response provides us with a glimpse into their mind, revealing the foundation for their thinking and whether that foundation is sound or not.

In a classroom, the interaction between a teacher and one student should also support the entire class.  When a student is asked “What makes you say that?” their response, backed with evidence, provides their peers with an opportunity to consider another viewpoint and perspective.  The reasoning students hear from peers can serve to further develop their thinking and understanding.  As this routine is used, class discussions deepen, going beyond surface answers or personal opinions.  It also empowers all members of the learning community and helps students recognize that the teacher is not the only “keeper of answers.”

Using “What makes you say that?” helps convey a sense that correctness of an answer doesn’t lie in a lone outside authority but in evidence that supports it. (1)

Try this thinking routine with the students in your life.  As you do, remember the following:

The very first time I used this thinking routine, the positive results surprised me.  Time after time, students paused, gathered their thoughts, and then answered in more depth.  I found myself more interested in what they had to say and their classmates were more attentive.  Even when the responses I heard revealed a student’s misunderstanding of the content we were discussing, the class was far more engaged in working past those misconceptions. The work to do so became a team effort.  I have a feeling the confusions voiced by one were shared by others as well. WMYST? is one of the most useful strategies I have in my teacher toolbox.  I now understand why the teachers from Lemshaga Akademi in Sweden refer to it as the “magic question.”

Enter your email address to receive notifications of new posts by email.